December 1 is World AIDS Day – a day set aside by the World Health Organization to raise awareness of the HIV/AIDS pandemic.…

Is the Minister of Health Celebrating the Deaths of HIV Patients?

December 1 is World AIDS Day – a day set aside by the World Health Organization to raise awareness of the HIV/AIDS pandemic. Although it is ceremoniously marked on a day, the entire month of December is often used to draw attention to the fight against HIV and to reflect on the progress made so far. On 13 December 2019, The Punch Newspaper reported the Minister of State for Health, Senator Adeleke Mamora, to have said at a public function that, “Over the years, the government has put in place several response mechanisms towards reducing the burden of HIV and AIDS in the country, as evidenced by the reduction in the HIV prevalence from the 3.1 per cent to 1.4 in the last survey.”

As a research scientist who works in the field of HIV, it is not clear to me why the Nigerian government is overly focused on HIV prevalence and why they appear to celebrate the supposed drop in the prevalence. This article draws attention to why this is wrong, misleading and tantamount to celebrating the deaths of people living with HIV (PLHIV) in the country.

The 2018 Nigeria HIV/AIDS Indicator and Impact Survey (NAIIS), the most recent and most comprehensive survey on HIV conducted in Nigeria, showed that the prevalence of HIV among adults aged 15 to 64 years was 1.5%. The survey estimated the number of PLHIV in Nigeria to be 1.9 million. In 2012, the National HIV&AIDS and Reproductive Health Survey (NARHS Plus II) estimated the national HIV prevalence to be 3.4% in the same age group, with an estimated 3.4 million PLHIV.

This means that between 2012 and 2018, the HIV prevalence and the number of people living with HIV declined substantially from 3.4 million people to 1.9 million people.

The Government’s explanation for the decline in HIV prevalence

As quoted below, the Nigerian government has provided the narrative that the decline in HIV prevalence in Nigeria is due to its HIV response programme.

“Over the years, the government has put in place several response mechanisms towards reducing the burden of HIV and AIDS in the country, as evidenced by the reduction in the HIV prevalence from the 3.1 per cent to 1.4 in the last survey.” – Senator Adeleke Mamora, Minister of State for Health.

In the last 15 years, we were talking of 3.5 million people living with the epidemic in Nigeria. But today, we are talking of about 1.9m people with the disease, or less, across the country. – Dr. Gambo Gumel Aliyu, Director-General of the National Agency for the Control of AIDS (NACA).

Alternative explanations for the decline in HIV prevalence

It is a welcomed finding that the HIV prevalence and number of PLHIV in Nigeria is actually less than what was previously thought. However, the above explanation provided by the Nigerian government should be interrogated.

Some experts have suggested that the reported drop in HIV prevalence and the number of PLHIV is due to improved surveillance, meaning that previous estimates were less valid. Clearly, the 2018 data is more accurate, giving the much bigger sample size and other methodological considerations. In fact, what led to the implementation of the NAIIS in 2018 was the concern of the previous Director-General of the NACA, Dr Sani Aliyu, about the validity of previous estimates of HIV prevalence. Dr Aliyu is reported to have discussed his concerns with UNAIDS which led to the agreement to implement a more robust survey that would provide more valid and detailed insights into the HIV epidemic in Nigeria.

Another possible explanation for the decrease is the high number of HIV-related deaths in Nigeria. If the government believes that the HIV prevalence reported in the past are equally valid, then, the decline in the prevalence should be attributable to high HIV-related deaths.

The prevalence of a disease is affected by a number of factors, including the rate of new cases (incidence) and the rate of exit (cure or mortality). Since HIV is incurable, the prevalence is mainly driven by incidence and mortality. Therefore, an excellent national HIV programme should aim to achieve two overarching goals. The first should be to reduce the number of new cases. The second should be to improve access to antiretroviral treatment for those already infected, and thereby, minimise HIV-related deaths and increase the life span of PLHIV. HIV patients on ART achieve more or less the same life span as people not infected with HIV. This means that a national response programme should aim to increase HIV prevalence while gradually decreasing incidence until such a time that incidence becomes zero and the infected cohort begins to age and die. This should happen in the long term and not over a few years.

In an epidemiological synthesis I conducted for the South African government in 2019, I wrote that:

“Data from cross-sectional surveys and estimation models show that the prevalence of HIV in South Africa has continued to increase in the past decade to the current year. The current prevalence of 12.9% for the general population translates to 7.4 million people living with HIV (PLHIV) in South Africa. This increase can be attributed to the country’s HIV treatment programme, which has expanded over the years and translated to decreased HIV-related deaths and increased life expectancy.”

Also, in the United States and the United Kingdom, the prevalence and number of PLHIV have continued to increase in the last decade. In a nutshell, a good response programme should aim to increase HIV prevalence by putting more PLHIV on treatment. The decline in HIV prevalence in Nigeria in the last five to ten years, if valid, can be explained by the high number of HIV-related deaths. The data on access to antiretroviral treatment (ART) and HIV-related death appear to support this. Let me present some quick statistics on the latter.

The HIV indicators government should be reporting

The use of HIV prevalence by different high-level personnel in the current government appears rather intentional and devious for three reasons. Firstly, the government is aware of concerns around the validity of previous estimates, which is a compelling explanation for the decline. Secondly, such a decline in HIV prevalence, if valid, should be mostly attributable to the high numbers of HIV deaths. Thirdly, there are other indicators that reflect the country’s prevention and control efforts more directly than prevalence. These indicators are well-known and should be communicated to Nigerians periodically.

The government should cease celebrating the decline in HIV prevalence in Nigeria and attributing it to the efforts of the country’s response programme. This decline is either due to improved surveillance or high HIV deaths. Rather, attention should be drawn to indicators that are more valid and meaningful, reflecting the progress made by the country towards targets set by the UN. Such indicators include, number of new HIV infections, percentage of people who know their HIV status, the percentage of PLHIV who are on treatment and the percentage of HIV-positive pregnant women who received treatment to prevent transmission of infection to their unborn children.

Braimoh Bello is an epidemiologist, a university lecturer and the research technical lead at the Centre for Statistical Analysis and Research (CESAR). You can reach him at braimoh.bello@cesar-africa.com. The statistics reported in this article are in the public domain. 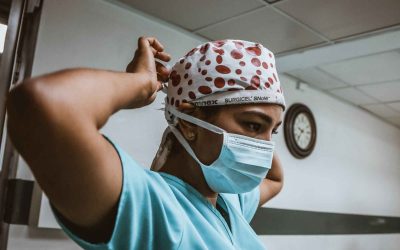 In the wake of the coronavirus pandemic, almost all of us have heard and/or read one or two...